Kents Cavern is a spectacular natural cave on the coast of South Devon, England with an incredible history that began 400 million years ago. 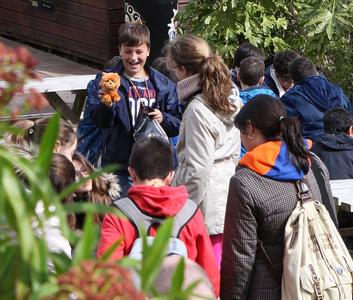 The cave was used by Britain's first humans including Neanderthals. Remains of mammoth, woolly rhino and cave bears are found here.

Our award winning attraction, with a café and gift shop, is a short walk from local beaches and the beautiful South West Coastal path. Kents Cavern is Britain's most accessible cave, in an urban setting, and we specialise in educational group and school visits, particularly from France, Germany and Spain. We operate on a guided tour basis and our guides are trained to work with large student groups. Torquay is a fantastic seaside resort to bring students with excellent host family facilities and lots of language schools!

Kents Cavern is a gateway for UNESCO's English Riviera Global Geopark in Torquay, the birthplace of Agatha Christie, the World's most published crime writer.

The tour of the cave gives an amazing insight into Ice Age life and an opportunity to see naturally formed chambers, stunning geological formations and to walk through an underground world that was home to Europe's first human populations.

Download a guide for your visit or an educational pack.

Take a trip around the cave with one of our specially trained tour guides and learn about Kents Caverns ancient past.

Many groups prefer to combine the cave tour with local food; why not try it?

Why not plan a whole day of activities! We’ll even organise it for you.