Two of the most popular questions asked are "when was the cave discovered? and "why is it called Kents Cavern?"

In reality Kents Cavern was never discovered.  We know ancient humans were in the cave thousands of years ago and Roman coins from 2,000 years ago were found under the "Face". The earliest inscription in the caves is from 1571 by William Petrie.  Robert Hedges also left his mark on 20th February 1688. 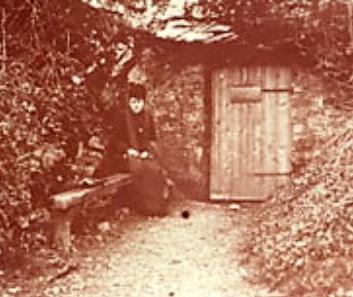 Written accounts of visits to the cave go back to Richard Polwhele in 1783 and include Beatrix Potter in 1893 and Agatha Christie in 1924.

Richard Polwhele (1783)
..my visit to this cavern hath given me fresh cause to regret that a county, the second in extent in England and the most various and diversified in soil and external appearance hath not produced one man who would undertake to celebrate its natural productions."

Dr Maton (1797) in "Observations from the western counties"
"A singular cavern, called Kent's Hole, is considered as the greatest curiosity in this part of the country."

Mr W Hyett (1803)
"the road opens into a spacious field, the lower part of which (a coppice) contains that celebrated cavern Kent's Hole, the aperture of which is not of any great magnitude and is almost shrouded in bushes."

Agatha Christie (1924) The Man in the Brown Suit

In an early novel, first published in 1924 (THE MAN IN THE BROWN SUIT) she refers to the archaeology of Kents Cavern.

In the book she changes the name of Kents Cavern to Hampsly Cavern and accurately refers to bones of Ice Age mammoth and wholly rhinoceros found there. Agatha Christie was later to discover a passion for archaeology through her husband Max Mallowan and made frequent visits to archaeological sites in the Middle East.

The children's story book writter visited Kents Cavern in 1893. This is an edited extract from THE JOURNAL OF BEATRIX POTTER

"I went on one singular suburban drive with mamma past Anstey's Cove and through a most dreary suburb named St Mary Church to Babbacombe. I was so disgusted with my drive that I privately incited papa to going into Kent's Hole next morning by a way of a reviver."

"I can imagine no more unlikely or unromantic situation for a cavern. It is in a suburb of Torquay, half way up a tangle bluff, with villas and gardens overhanging the top of a muddy orchard and some filthily dirty cows in the ravine below. I was pretty much exhausted when we found it, but by dint of eating cinnamon and the excitement of going into a cave, recovered."

"The dilapidated wooden door was flush into the bank. Outside an artificial plateau or spoil-bank of slate, overgrown. A donkey-cart was encamped and the donkey grazing, the owner a mild, light-haired young man was sawing planks."

"Papa inquired if there was anybody here? to which he replied with asperity 'I am', put on his coat and prepared to unlock the cavern. The donkey was apparently trustworthy, at least it was there when we came out."

"The proprietor ( I have already forgotten his name, which I regret, for he amuse me), hung a notice-board on a nail outside the door, to the effect that the Guide is at present inside the cavern, and scrubbed out certain derisive remarks which had been scratched on the portal during his last descent."

" I shall not go into details about the cave, which is well described in a pamphlet, and only remark it is very easy to explore and only moderately damp."

Emperor of Ethiopia, Haile Selassie and spiritul leader of the Rastafarians, visited Kents Cavern and was so impressed with his visit that he gave his guide, Leslie Powe a gold sovereign.

As a 14-year old prince, the future King of England visited Kents Cavern in 1879 while Queen Victoria, his grandmother, spent some time in Torquay.