Kents Cavern is a Scheduled Ancient Monument (SAM) and a Site of Special Scientific Interest (SSSI) and as a result, has the highest level of protection available in the United Kingdom. It is important that people understand the relevance of this and why Kents Cavern is awarded these titles. What is a Scheduled Ancient Monument?

A scheduled ancient monument is a nationally important archaeological site given protection against unauthorised change. The various pieces of legislation used for legally protecting heritage assets from damage and destruction are grouped under the term ‘designation’.

What is a Site of Special Scientific Interest?

A Site of Special Scientific Interest is a formal conservation designation. Usually, it describes an area that's of particular interest to science due to the rare species of fauna or flora it contains - or even important geological or physiological features that may lie in its boundaries.

Why is Kents Cavern important?

Kents Cavern has a rich geological history dating back to 385 million years ago when the Devonian limestone which surrounds the cave was formed. The rock was formed in a shallow sea south of the equator by the bones of sea creatures and coral compacting together on the sea bed.

Over millions of years, tectonic plates joined continents together, forcing the rock out of the ocean, folding it and creating a mountain range which spread from North America and throughout Europe. Some time later, these mountains were eroded by wind and rain, and the continents drifted apart to make them as we know today.

2.5 million years ago, the limestone rock here was eroded on the inside by a river, eventually creating these caves.

From 500,000 years ago, ancient species of human and extinct animals began using Kents Cavern as a place to shelter, leaving behind flint tools and bones for archaeologists to uncover thousands of years later.

In 1825, Father John MacEnery carried out the first systematic exploration of Kents Cavern, discovering some of the earliest evidence for the antiquity of man.

During the Great Excavation (1865-1880) William Pengelly uncovered over 80,000 prehistoric bones, teeth and tools in the cave, helping to prove human antiquity, and in the process, developed a meticulous excavation technique which went on to influence all archaeological work to this day.

How can you protect a cave?

Kents Cavern is a complex of caves and passages and it is our duty to not only protect the geological heritage but also the archaeological content which remains to be examined and discovered.

It is an onerous responsibility to shoulder the protection and conservation of a site that has history
of ancient human occupation going back 500,000 years, a longevity of interaction with humankind that cannot be matched anywhere else.

Any damage to the cave would be impossible to repair, given the lengths of time involved in cave geology. Therefore it is important that all visitors to the cave, whether they are staff, contractors, scientists or the general public, are aware of how special and unique Kents Cavern is.

In 2016 a conservation plan was designed to be used as a pragmatic guide and useful document to ensure the sustainability of the cavern and its natural environment. The plan is a comprehensive record of the caverns and passages, on and off the show cave route, evaluating each section of the cave, its sensitives and any specific risks throughout. Kents Cavern around the World 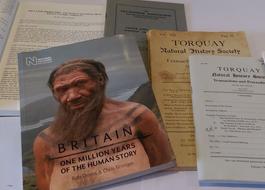