The nineteenth century brought huge changes to Kents Cavern as early explorers revealed a remarkable history of human occupation.  Some of the oldest stone tools in Britain have been found here, made by Homo erectus, or Homo heidelbergensis, over 500,000 years ago.  Other stone tools are from an age, and have a shape, associated with Neanderthal technologies. An in 1927 the most remarkable find was made - a human jawbone, the oldest human bone in Britain. 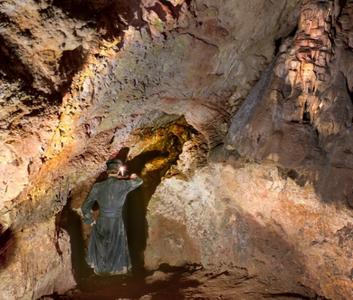 Over thousands of years Kents Cavern has become a natural treasure chest waiting for the next explorer. Throughout the early modern period many people were intrigued by the mystery of the caves and ventured inside. Many inscribed their names on the walls of the cavern, many of which can still be seen today. The earliest inscriptions include those from 'William Petre 1571' and 'Robert Hedges 1688'. Often these early explorers were braving the darkness of the cave, using candles as their only source of light and crawling over the boulder strewn chambers, much different to the cave we know today.

In 1824 Thomas Northmore headed into Kents Cavern searching for underground temples used by followers of Mithraism, a cult which originated in Rome a few thousand years ago. The religion was perceived to be especially popular with Roman soldiers, who were found in the Torbay area using caves such as Ash Hole as a shelter. Northmore discovered the remains of animal bones such as bear and hyena alongside stone tools. It would be Northmore who would lead another well-known Kents Cavern excavator into the cave next…

Chaplain to the Cary family who lived at Torre Abbey, MacEnery developed an interest in archaeology and ancient ruins. During summer retreats to the 13th century Ilsham Chapel, situated across the valley from Kents Cavern, MacEnery began to explore the caves and uncovered bones of extinct prehistoric animals and human-made flint tools lying side-by-side under thick stalagmite floors.

"[I went] … to a spot which had been disturbed. On rumbling it over, the lustre of enamel [revealed] the first fossil teeth I had ever seen. As I laid my hands on them, relics of extinct races… I shrank back involuntarily"

Drawings of his findings were prepared for publication but he could not raise the funds to publish his muddled manuscripts. He needed to arrange his recordings but he found them such a jumbled mass of contradictions that he ended up convincing himself that he was wrong.

Today we know that MacEnery had indeed discovered that humans had lived in the caves thousands of years ago before the generally accepted date of humankind's origin according to biblical chronology.

William Pengelly, was inspired by MacEnery's work.  The Victorian cavern excavation carried about between 1865 and 1880 was masterminded by him. He lived in Torquay for over 40 years and his cave researches attracted distinguished visitors to his house; members of the British, Russian and Dutch Royal families and even Napoleon III.

The existence of a cave in Wellswood was well-known but unlike the discovery of another important cave in Brixham in 1858, Kents Cavern has never been “discovered”.  Roman coins later discovered indicated modern people had been venturing into the caverns for over 2,000 years.

Uncontrolled access to the cave for hundreds of years presented a challenge to Pengelly’s theories of ancient human occupation.  He had to devise a scientific method to convincingly refute claims the stones had been buried by modern visitors.

He came up with a three-dimensional grid mapping system, commonly used today but entirely new in 1865 and employed a small trusted team.

Pengelly spent a year excavating a cave in Brixham. This cave was discovered when workman, laying house foundations, broke into a large cave and found man-made flint tools. It was here that Pengelly's quest for proving human antiquity began.

For his most important and largest excavation yet, Pengelly came to Kents Cavern and launched the 15 year long Great Excavation lasting from 1865-1880. The excavation laid the founding stone for modern archaeological work today. Pengelly and his team dug through stalagmite floors and revealed what lay beneath, tools of ancient man with bones from extinct animals, even discovering hand axes from humans who lived over 500,000 years ago.

Pengelly meticulously recorded every object found, its location and level within the cave sediments. Today, his diaries are some of the best information on the archaeological and geological story of Kents Cavern and give an amazing insight into how the cave might have been during the Victorian period.

Arthur Ogilvy was curator of Torquay Museum and led two excavations in the caves, in 1927 and 1941. His greatest find was a human jawbone, found in 1927.   On display at Torquay Museum, it is the oldest modern human fossil ever found in Britain and one of the oldest in Europe.  Thought to be between 41,000 and 44,000 years old, a maxilla, the upper jaw, it has been subjected to years of research and testing, and indeed debate, as questions remain over its age.  There is no doubt it is very old, at least 38,000 years old.

Ogilvy's find continues to interest scientists as it suggests that Neanderthals and Homo sapiens may have lived together in Kents Cavern about 40,000 years ago.