During the last Ice Age, the ice sheets never came as far south as Kents Cavern which meant more life could survive, even so the surrounding area was experiencing tundra like conditions. 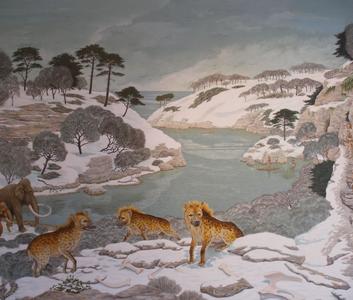 Kents Cavern started to begin forming around 2 million years ago. Water began to create fissures, which led into larger passageways and chambers. The period from 1.6 million years ago to 12,000 years ago is called the Quaternary this included the period of the last Ice Age or glacial also known as the Devensian.

The table below shows the different glacial and interglacial periods as there were actually more than one..

During the cold stages, the sea levels would be much lower than today, by up to 120 metres. Today, we can see the remains of the cold stages through fossilised tree trunks, submerged in today's seawater but visible at extremely low tides. During the lower sea levels animals and man could walk freely towards Europe. Amazing remains of Ice Age beasts were unearthed from Kents Cavern during the Victorian period.

As the planet's temperature rose, the ice sheets melted and the sea levels began to rise once again, closing off the established links to Europe. Plant life would flourish and warm weather animals began to appear, in Joint Mitnor Cave just 20 miles from Kents Cavern. Remains of straight tusked elephants, bison and even hippopotamus were found.

Each successive Ice Age left its mark on Kents Cavern by infilling the caves with sediments, often containing bones of animals. Amazing formations such as stalagmites and stalactites formed during the interglacial periods, as cave formations are created by running water carrying the high levels of carbon dioxide. The carbon dioxide was in abundant during the warm stages when there were lots of plants around. The carbon dioxide reacts with the cave atmosphere and produces calcite formations.

Often layers of calcite would build on top of the sediments washed in creating what's known as a stalagmite floor. These floors would entomb thousands of bones and artefacts to be unearthed by our early excavators.