The geology in Torbay is of international value and much of it can be seen in Kents Cavern which is made from the same rock found in the cliffs and headlands around Torbay.  Not the red sandstone cliffs at Paignton, although these give the caves a red glow, but the pinkie-grey cliffs at Berry Head, Brixham or in the built infrastructure around town.  The rock is Devonian Limestone, a sedimentary rock, formed roughly 380 million years ago, at the bottom of a tropical sea, south of the Equator. 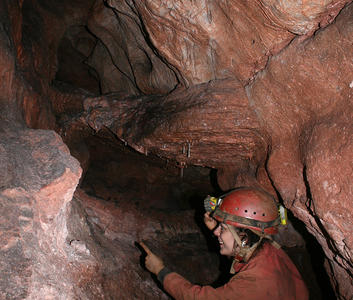 Kents Cavern is made up of Devonian limestone formed over 3,000 miles away beneath the sea. During this time (and now!) the sea was home to smaller organisms who extracted calcium carbonate from seawater to make and strengthen their shells and bones. When these organisms die they settle at the bottom of the sea where their remains are compressed and hardened over millions of years to form our Devonian limestone rock.

About 300 million years ago, massive movements in the earth's tectonic plates caused several continents to crash into each other. The Variscan Orogeny, a huge mountain building event created the super continent of Pangea and push, cracked and crumpled our rocks towards the Torbay area, a mammoth journey of 3,000 miles!

Around 2 million years ago, the cave began to form. Rainwater finds its way through cracks and gaps in the rock dissolving the limestone and creating fissures which get larger and larger. This is through a process of solution, created from rain water (H20) mixing with carbon dioxide (CO2) in the air and forming a weak carbonic acid (H2CO3). As the water makes it ways through layers of soil it collects more carbon dioxide. This carbonic acid very slowly dissolves the limestone and forms calcium bicarbonate (Ca (HCO3)2). The fissures in the rock continue to grow, slowly getting larger and forming small passages. The small passages begin to fill with water gouging out parts of the rock, known as the caves 'phreatic phase'. Huge circular passages and canyons were left behind once the water table dropped. Boulders and rocks collapse from the roof of many chambers in the cave widening it further.

Calcium carbonate or calcite is left behind once the carbon dioxide built up in the water has dissipated. Calcite can slowly build over time, piling up over thousands of years. In the case of tiny stalactites or straws the calcite is left in a small ring, which builds downwards over time. Straws can grow thicker and longer eventually becoming fully grown stalactites and adorning the roof of the cave! Often, water may drip onto the floor depositing calcite in a certain place continuously, until a stalagmite is created. Spectacular formations are made when the water runs or builds up in a different way often forming unusual shapes such as; curtains, gour pools, rimstone, columns, flowstone or even rare helictites.

Roughly half a million years ago Kents Cavern began to be filled with sediments. The first of these sediments is called breccia, a thick flow of debris, entering through the western entrances of the cave (not the ones we use today). The breccia, flowed down and partially blocked some of the major passageways. Within the breccia were early human hand axes and ancient mega-fauna remains, such as bones from ancestral cave bears. Thick stalagmite floors grew over the breccia, a process which takes thousands of years, sealing it in place. During the last Ice Age sediments now known as 'cave earth' flowed into the cave on top of the crystalline stalagmite floor which sealed the breccia underneath. The cave earth was found to have held the most remains of human and animal occupation of the cave including; Neanderthal hand axes, hyaena, cave bear, cave lion, scimitar-toothed cat, woolly mammoths and woolly rhinos! Once again another stalagmite floor formed over the top of the cave earth sealing in the remains and leaving them in a stable condition until they were excavation thousands of years later.