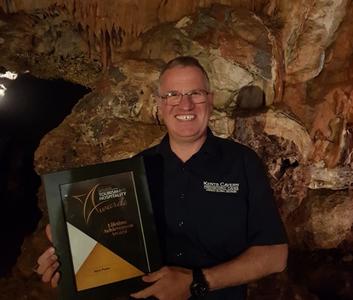 In a surprise announcement withheld from the published programme, Nick Powe, director of Kents Cavern, received the Lifetime Achievement Award at this year’s South Devon and English Riviera Tourism and Hospitality awards held at the Riviera International Conference Centre on Thursday 2nd November 2017.

Herald Express editor Jim Parker, a Trinity Mirror newspaper,  said Nick had not only made his own business a success but had spent many, many years looking ‘at the bigger picture’, promoting and championing the English Riviera and South Devon literally around the world.

He said Nick has worked tirelessly in the tourism and hospitality sector, on the board of the former English Riviera Tourism Company, past chairman of trustees at Torbay Coast and Countryside Trust, and secured a 700 delegate Global Geopark conference for Torbay described as: “a unique event from a leading world ambassador for South Devon and a unique and pretty special person.”

Nick Powe, 5th generation owner of the cavern, said: “I was caught completely off guard and somewhat embarrassed to have been honoured in this way.   The award was announced in front of hundreds of people representing the very best South Devon has to offer, and that made receiving such a prestigious award a very special moment for me.  I am passionate about this area and remain committed to ensuring the World knows about just how amazing South Devon is and the quality of what’s on offer here.” 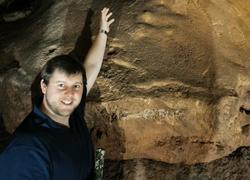