During the last interglacial period, warm weather animals such as straight tusked elephants, hyena, bison and hippopotamus were inhabiting just 20 miles away from Kents Cavern; their remains being trapped in a small local cave. Yet, during the glacial or Ice Age period, Kents Cavern was home to animals such as woolly mammoths and rhinos... 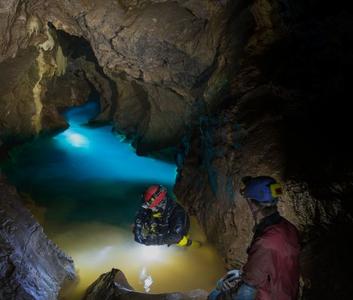 Mostly likely the most popular cave in Devon, Pridhamsleigh is a classic novice cave, popular with caving groups, scouts and adventure caving organisations. The cave boasts an underground lake (which can be dived and leads into the county's biggest chamber), tight squeezes, interesting climbs and lots of mud! The best way to go caving is to contact a caving group or organisation.

Situated next to Pridhamsleigh Cavern, Dog Hole can be more hard work. Access to the beginning boulder chambers is fairly easy, however those heading into to Dog Hole Extensions must first negotiate the tricky 'dog leg', a squeeze around an incredibly tight and awkward right angle bend - not for those bigger than an average build or height!

Now known as the largest Devon Cave, Bakers Pit is an extensive cave system that partly connects to Reeds Cave. The cave is a sporting system with boulder halls, tight passages and exciting climbs. Bakers pit is a popular novice cave, if you'd like to try it then contact a local caving group.

Reeds Cave is one of the most spectacular caves in Devon with some incredible formations. Due to this access is for British Caving Association recognised cavers only. A leader lead system is in place.

Similar in ways to Kents Cavern, Joint Mitnor Cave or Bone Cave has important deposits originating from the last Interglacial period around 125,000 years ago! The cave, acted a deep pit in which many warm weather animals fell into, to eventually become part of the caves deposit. Incredible remains of straight tusked elephants teeth, hyena, rhino and bison bones are all visible from the path.

The cave is open to the general public, on Wednesday and Thursday throughout August. Contact the Pengelly Centre to find out more.

ABOUT THE PENGELLY TRUST

The caves of Higher Kiln Quarry are managed by the Pengelly Trust which was established in 1962 and aptly named after William Pengelly, Kents Cavern's pioneering excavator. Not known to most, Pengelly not only dedicated much of his life to excavating Kents Cavern but many of the caves in the local area as well. The Trust provides research and resources for cave related studies as well as promoting cave conservation, caving and bat studies.

The William Pengelly Caves Studies Centre has a museum dedicated to the local caves and their finds. Members of the public can visit the caves on August open days and even venture on a geological walk of the local area.